Durdle Door: A fabulous day out in Dorset! 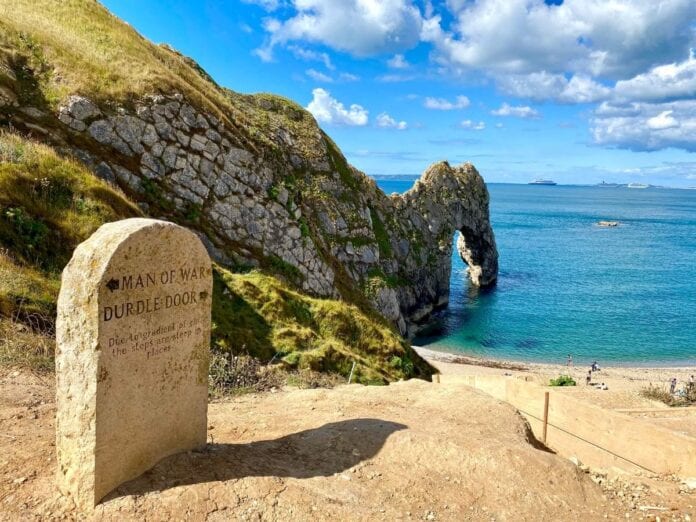 Durdle door has to be one of the most photographed locations on the Dorset coast. Situated along the famous Jurassic coast, this unique rock formation was the result of softer rock being eroded away behind hard limestone, allowing the sea to eventually punch a hole through.

This post may contain affiliate links. That means that if you click on a link and purchase something I recommend, I will receive a small commission at no extra cost to you. As an Amazon Associate, I earn from qualifying purchases. This helps keep my website up and running and is very appreciated. Thank you for your support! You can read my full disclosure policy here.

How to visit Durdle Door and the nearby Lulworth Castle & Cove

The Jurassic Coast is now a UNESCO World Heritage site that stretches 96 miles through Dorset and Devon. The area is a geologist’s dream, telling the story of 250 million years of evolution. People from all over the world descend on many of the areas beaches searching for fossils along its constantly eroding coastline.

One of my first trips post lock down was to the beautiful Dorset coast with my parents. Whilst there, I decided to take myself off and check out the famous Durdle door as well as the nearby Lulworth Cove and Castle. Read on to hear all about what I got up to and how you can visit this beautiful part of Dorset for yourself.

Getting to Durdle Door:

Durdle Door is located in the village of West Lulworth on the B3070 which leaves the A352 (Wareham to Dorchester road) at Holmebridge. You can access the carpark via Winfrith Newburgh and also West Lulworth Village.

There are 2 parking locations at Durdle Door, standard and a pre-booked premium.

Standard parking opens at 9am till 9pm and costs £10 for the whole day, however you must get there early especially in the peak summer season as this parking fills up fast!

You can also pre-book parking in an adjacent carpark for £10 for 4 hours and £15 for all day. Car park opens at 9am and closes at 10pm. You can pre-book parking on the Justpark website here.

The nearest railway station is Wool (on the London Waterloo to Weymouth line by South Western Rail). Bus numbers 15, 30 and X55 connect Wool Railway Station to West Lulworth for Lulworth Cove and Durdle Door. Please check individual bus operators for times as they are subject to seasonal changes.

There are 3 bus services to West Lulworth for Lulworth Cove and Durdle Door (numbers 15, 30 and X55). Please check individual bus operators for times as they are subject to seasonal changes.

Both Durdle door and the adjacent Man ‘O’ War beaches are part of the Lulworth Estate. Both these beaches are only acessible on foot via a steep path from the carpark located on the cliff top next to the Durdle Door Holiday Park.

Due to current social distancing measure there is currently a one way system in place taking visitors one way down to the beach and the another back up to the carpark. This makes the walk down to the beach about 10 minutes longer but it does give you some better views and you arrive at Durdle Door beach.

The route first takes you up the hill next to the caravan park and then down through a small wooded area and then across another field and up another slight hill. I did wonder where the route was taking me at first but it did open out to some of the most amazing views of Weymouth bay. Defo worth the effort if you ask me!

From this point you only have to walk along the cliff top and you will find the steps at the end of the trail that lead you down to either Durdle Door or Man ‘O’War beach. Both beaches are equally as nice, however Man ‘O’ War is probably quieter. I spent most of my time taking photos and just wondering around and having a little paddle in the water. Although the sun was out, it wasn’t particularly hot so I didn’t feel the need to take a proper dip. However, I did see some brave souls having a swim!

Both these beaches don’t have any facilities or any lifeguards on duty but there are public toilets and a couple of snack shops next to the carpark. My advice would be to pack a picnic, pick out a nice spot and enjoy the beach, but make sure you keep an eye on young ones, currents can be stronger than you think.

Although both the beaches are beautiful to admire from afar, they are not the easiest to walk on due to being mostly pebbles. Sandals aren’t the most practical as most of the tiny pebbles will easily find their way under your feet. Barefoot it a little bit easier but watch out for some of the sharper pebbles. I would recommend wearing full shoes whilst walking along the beach. make sure you bring a thick blanket to sit on as well!

You can either spend most of the day relaxing and enjoying the beach at Durdle Door or like me you can take a walk along the costal path towards the beautiful little village of Lulworth and its pretty cove.

The walk itself takes about 45 minutes and is not too strenuous to get there, however the walk back will mean a huge hike up a very step hill! If you don’t fancy walking you can always take the short drive and park in Lulworth village. I believe the carpark here only costs £5 for the day.

The costal path can be reached by taking the steep gravel path back from Durdle Door towards the carpark. The costal path then continues on from the carpark and is well signposted. The walk is lovely offering fantastic views along the coast and then leads down a steep pathway towards the village.

Once in the village you will find numerous shops, restaurants, cafes as well as a visitor centre which was unfortunately closed when I visited. The village itself is extremely pretty with many thatched cottages as well as the typical Dorset stone houses.

You can either walk through the village towards the beach or take the scenic route and walk back up another hill to get some much better views of the whole cove. After taking a quick look at the beach which was looking quite busy, I decided to take the scenic route up the hill. The view were pretty good but I don’t think they are as nice as the ones around Durdle Door.

Once finished in Lulworth I returned back to the car. However be prepared for the walk back up the hill, its gruelling! Although every time you stop to catch ya breath you are treated with some lovely views to make up for it!

Once back at the car it was time for me to take the short 10 minute drive to Lulworth Castle.

Lulworth castle stands in extensive parkland within the 20 square mile Lulworth estate. Built in the 17th Century, this magnificent building is steeped in history. Originally built as a hunting lodge to entertain aristocracy and royalty, it was for centuries the family seat of the Weld family, the current owners of the Lulworth Estate.

Although the outside of the castle has remained the same since it was built, the inside has changed dramatically. In 1929, a fire raged through the castle, gutting the interior and leaving it close to ruin. However the castle has been partly restored after a partnership with English Heritage.

Entrance to the castle is currently only via pre-booked tickets made on line here. Those with English Heritage membership can visit for free otherwise tickets cost £6 for adults and £4 for children.

The castle is open to the public mon-fri between 10.30am and 5pm. Parking on site costs £3 (even for English Heritage members)

As you step inside the castle you will see that most of it is still in ruins, however you can still glimpses of what it must of been like in its heyday. One of the towers has been fully restored so that you can climb up it but it was closed the day I visited due to social distancing measures.

You can still however walk through the one way system into the different areas and rooms within the castle. Some of them have also been dressed as they would of been hundreds of years ago. There are also lots of information stations and a small museum giving more information about what life was like for those living and working within the grounds.

After wandering around the castle I grabbed a coffee to go and decided to walk around the grounds. Just next to the castle you will find a lovely little church which again was closed as well as the unusually designed Chapel of St Mary.

The chapel is thought to be the first free-standing Roman Catholic Church to be built for public worship in England since the reformation. This was due to some crafty architectural design. King George III gave the family permission in 1786 to build a mausoleum stating ‘you may furnish it inside any way you wish’. It wasn’t until 5 years later that Catholics were able to legally worship again in public.

So by now I was absolutely shattered and it was time to head back to West bay. I really enjoyed exploring this beautiful part of the Dorset Coast and can’t wait to see what else the area has to offer.

14 Fabulous things to do in Edinburgh!

Hope you have enjoyed this guide to visiting Durdle Door and surrounding area, have you been to any part of the Dorset Coast or recommend any other places to visit? If so, let me know in the comments below.

A Fabulous Day out at Lyme Hall Park and Gardens.

13 Fabulous Things to do in Buxton: The heart of the Peak District!