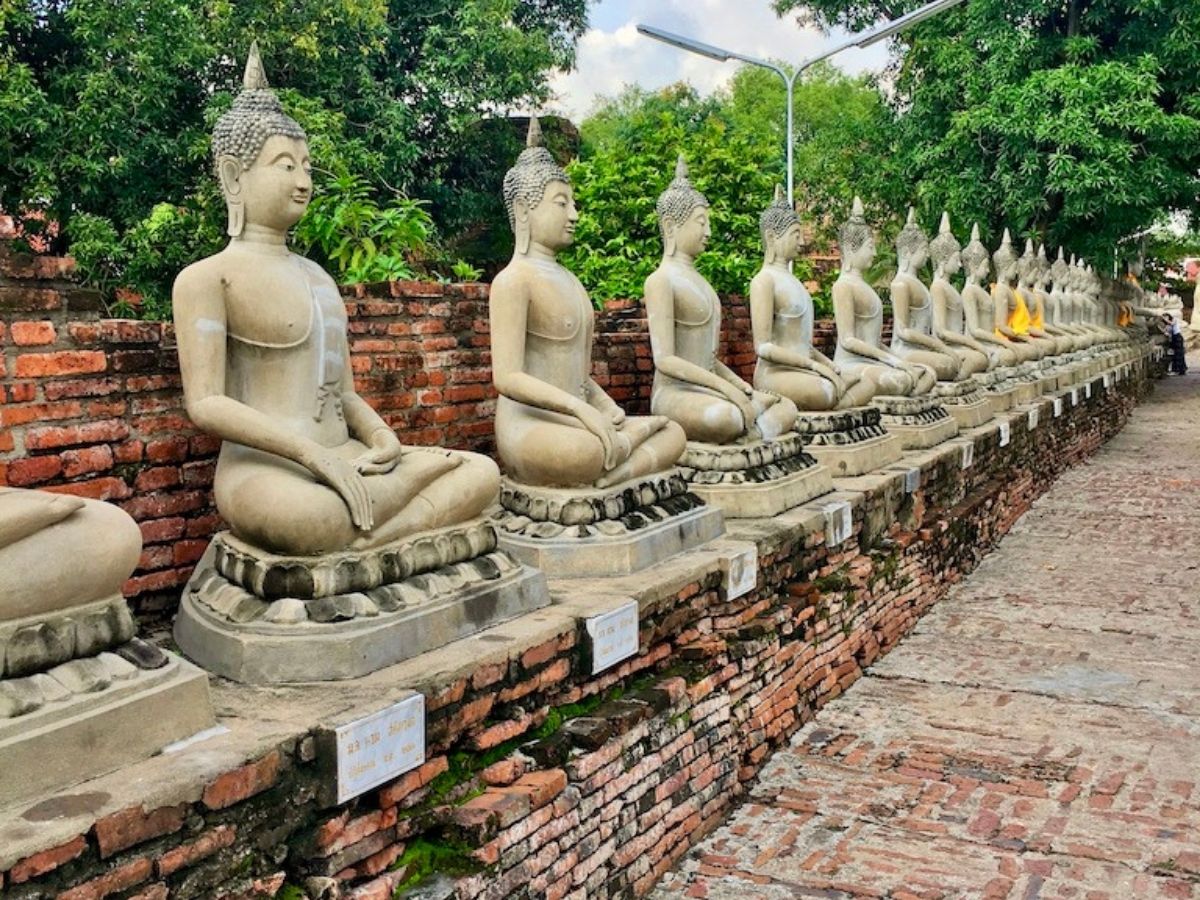 Just a couple of hours drive from Bangkok you will find Ayutthaya Historical Park, a UNESCO world heritage site. Founded back in 1350, Ayutthaya became the second city of the Siam Empire.

This post may contain affiliate links. That means that if you click on a link and purchase something I recommend, I will receive a small commission at no extra cost to you. As an Amazon Associate, I earn from qualifying purchases. This helps keep my website up and running and is very appreciated. Thank you for your support! You can read my full disclosure policy here.

During the 14th and 18th centuries the city grew into one of the world’s largest cities with a population thought to be around 1 million people! The city was largely destroyed by the Burmese in the 18th century but many of its ruins remain, characterised by tall prangs (towers) and Buddhist monuments.

Today Ayutthaya Historical Park attracts tourists from all over the world, most arrive from Bangkok for a day trip but many visitors  stay for a few days in one of the many guesthouses or hostels.

I have visited Ayutthaya twice, once as a day trip from Bangkok and more recently as an overnight trip. To be honest, as much as I enjoyed exploring the historical sites, I was not so impressed with the city itself, I found the centre of town to be extremely busy and found the constant harassment of tuk-tuks to be quite tiresome! In my opinion unless you are specifically interested in exploring the sites in more detail, a day trip will give you more than enough time to explore the area.

If you do want to stay for a few days then I can highly recommend the Yim Whan Hostel, for only 700 Baht (£16) a night, you can have a double room with balcony. It also houses a great coffee shop downstairs with the most amazing cakes! For booking accommodation I recommend using Booking.com.

Ayutthaya Historical Park: How to get there

Ayutthaya can be easily reached from Bangkok. You can either get one of the many tourist minivans, the train or by an organised tour. Once in Ayutthaya you will be met with many tuk-tuks waiting to drive you around the sites. All charge a flat hourly rate around 200-300 Baht with pre-organised routes available; however these rates and routes can be negotiated with the driver. 3 hours should be plenty of time to see the best sites.

If you are feeling energetic you can also get yourself a map and hire a bicycle for around 100 Baht, however be warned, the sites can feel quite a distance away when dealing with the hot summer sun!

Bangkok to Ayutthaya by bus:

Probably the easiest way to reach Ayutthaya is to catch a minivan from one of the many bus stations around Bangkok. You can buy tickets from most hotels and travel agents in and around Bangkok. However the easiest and cheapest way is to buy them online from 12Goasia.com. Vans regularly depart from Mochit new van terminal to Ayutthaya at a cost of 90 Baht (£2.20) and take approximately 2 hrs.

Bangkok to Ayutthaya by train:

You can catch the train to Ayutthaya from Bangkok’s Hua Lampong station at a cost of around 60 Baht (£1.45) and takes around 2 hrs; however the trains in Thailand do not always follow the schedule with many taking much longer than advertised.

Although this route may be longer than the bus, the views from the train more than make up for any delays. You can buy tickets at the station on the day or even in advance using 12Goasia. Perhaps get the minivan there and opt for the train back to Bangkok?

If you don’t fancy taking the independent route to Ayutthaya, you can also take one of the many tours offered by hotels and tour operators. These tours can sometimes be long and tiresome and cost upwards of 1500 Baht each (£35) Some tours offer a boat trip back to Bangkok including lunch which maybe a preferred option for some, however you won’t have as much time to visit all the major sites. For the best value tours I recommend Get Your Guide:

Which temples to visit:

There are so many sites to visit around Ayutthaya Historical Park that you won’t be able to visit them all, so here’s my list of the best sites:

Wat Ratchaburana was built by King Borom Ratchathirat II, the wat marks the spot where his two brothers had fought and killed each other fighting for the vacant crown.

The large remaining prang was the centre piece of the compound and the vault contained gold jewellery, artefacts and votive Buddhist tablets, however looters broke into the vault in 1957 and raided all that was inside. Displayed inside the vault was many mural paintings, depicting the lives of Buddha, however many of these images have deteriorated and only a handful are still visible.

Wat Mahathat is probably one of the most famous sites in Ayutthaya, it is here that you will find the Buddha head entwined within the roots of a tree. Wat Mahathat is located in the centre of Ayutthaya and was the residence of the supreme leader of the Thai Buddhist monks and is thought to have been built during the 14th Century.

Wat Phra Si Sanphet is the site of the 3 chedi’s, the first two were built by King Ramathibodi II in 1492. The chedi to the east was for the cremated remains of his father and the now middle one, for his elder brother. The third chedi was built by King Boromracha IV to house the remains of King Ramathibodi II. This site is probably one of my favourites as there is so many ruined buildings to explore.

Wat Yai Chai Mongkhon is one of the first historical sites you will encounter if travelling into the city from the east. Its large bell-shaped chedi sits high on an elevated position with stairs leading up to its terraces. There are rows of Buddha statues along the sides of its gallery which were originally destroyed but have since been re-sculptured. This is also the site of a large reclining Buddha.

Wat Chai Wattanaram is an impressive site, situated on the banks of the Chao Phraya River. There are many structures including several large chedi surrounded by an inner and outer wall. Along the inner wall you will find rows of Buddha statues which were beheaded by the Burmese in 1767. If staying in the city overnight this temple is said to be the best place to watch the sunset.

The high-light of Wat Lokkayasutharam is its enormous Reclining Buddha measuring 42 meters long and 8 meters high. In front of the Buddha is a small altar with a small reclining Buddha where visitors can make offerings, many of which use pieces of gold leaf given out by the local ladies.

Wat Phu Khao Thong was a monastery originally built in 1395 on the north east side of the current site by King Ramesuan, however after the Burmese invasion in 1569 the current structure was built as a Burmese style chedi but was never finished. Years later Prince Naresuan had a Thai style chedi built on top of its base to commemorate its independence and victory over the Burmese in 1584. If you’re feeling energetic you can climb up all 79 steps to the top.

There is no fee to enter the Historical Park; however most of the sites charge a small fee of around 50 baht or less.

It is also important to remember that although these are ruined sites they are still seen as sacred monuments to Buddhists, therefore please remain respectful, never climb on a Buddha statue, and please follow the dress code of covering shoulders and wearing long pants or skirts.

Ayutthaya Historical Park is a lovely day out from the hustle and bustle of Bangkok; just remember to bring plenty of water, a hat and sunscreen as the heat can be very intense especially during the day.

13 Fabulous Things to do in Buxton: The heart of the Peak District!

100 Positive Habits That Can Improve Your Life!

10 Wonderful things to do in Aberystwyth, Wales

36 Wonderful Gifts For Nurses That They Will Love!